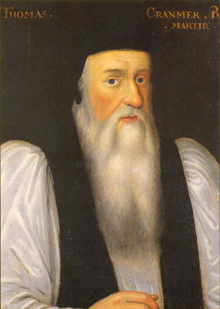 In this 500th anniversary of the Reformation, Bill recounts the life of the man who did as much as any other to reform the Church of England.

Thomas Cranmer was Henry VIII’s archbishop, the architect of the Prayer Book and a towering figure in the history of the English Reformation. All Christians – especially Anglicans – should get to know something of his life, his work and his reformed beliefs. The best (large-scale) biography about him is by Diarmaid MacCulloch and is highly recommended.

Cranmer was a Fellow of Jesus College Cambridge and came to prominence when he suggested a way forward for the king who desired a divorce. He became ambassador to the Emperor Charles V and then Archbishop of Canterbury in 1532.   Cranmer was already married by this stage, though it is unlikely that Henry knew about this or his reformed beliefs.

He was primarily a quiet scholar, who was not that interested in church politics. His reformed convictions came to the fore when he opposed the conservative 6 Articles in 1539 in the House of Lords. The King, however, liked Cranmer and protected him from theological conservatives who attempted to ruin him. As time went on Cranmer developed his contacts with the continental reformers and his convictions became more and more Protestant.   He wrote the preface to the official English Bible which was to be placed in all parish churches. By 1546 Cranmer believed the doctrine of justification by faith alone and disbelieved the doctrine of transubstantiation.

Cranmer performed his final duties for the king on 28 January 1547 when Henry was near death. He gave a reformed statement of faith, praying that Henry would be helped to trust in Jesus, while gripping his hand, instead of giving him the last rites.   Cranmer mourned Henry’s death and it was later said that he demonstrated his grief by growing a beard. The beard was also a sign of his break with the past. The continental reformers grew beards to mark their rejection of the old Church and this significance of clerical beards was well-understood in England.

Under the new king, Edward VI, reform proceeded quicker. Hugh Latimer was asked to preach at court, both bread and wine began to be received at Communion, the clergy were allowed to marry, and Cranmer’s wife began to appear publicly.

In March 1549, the city of Strasbourg forced the famous reformer Martin Bucer to leave. Cranmer immediately invited him to come to England and promised that he would be placed in an English university. When he arrived on 25 April, Cranmer was especially delighted to meet Bucer face to face after eighteen years of correspondence. He needed scholarly men like Bucer to train a new generation of preachers as well as assist in the reform of liturgy and doctrine.

The Book of Common Prayer (1549) became the legal form of worship.   In part it was modelled on German Protestant church orders and its emphasis on congregational participation was based on the principles of Luther. While it was officially the work of thirteen Divines who made up the Windsor Commission, Cranmer is given the credit for the editorship and the overall structure of the book. It would go through several more reforming editions. Archbishop Cranmer was making great leaps forward in his work of Reform, but there would be dangerous days ahead for him personally.

Archbishop Cranmer and the reforming party were extremely productive in the years 1550-1553. Indeed they succeeded in doing all that any reforming German or Swiss city had done.   They produced a new and simplified liturgy in the vernacular, with a Swiss doctrine of Communion, published a new statement of doctrine (the Forty Two Articles of 1553, soon to become the 39 Articles), stripped the churches of images and side altars, replaced the high altar with a holy table and weakened the authority of bishops by extending the royal supremacy.

The 1552 Prayer Book was the high point of English Reformed liturgy. Changes were being made regarding vestments, prayers for the dead, the anointing with oil and an overall simplified liturgy. Several passages in the Communion service were altered to remove the Lutheran or Roman doctrine of the Real Presence. The Eucharist became primarily a memorial of a sacrifice and the gift was a purely spiritual gift received by the heart and not the hand.   Nevertheless in 1553 England was by no means a Protestant country. The Reformation had captured the allegiance only of a few theologians and some educated merchants and other members of the middle class, particularly in London.   That changed after the Reformation martyrs.

Henry VIII’s daughter Mary grew up with an almost fanatical attachment to Rome. She came to the throne in 1553 aged 37 and her objective was to restore the Catholic faith. The Reformed bishops Latimer, Ridley, Coverdale, Hooper and Cranmer were imprisoned. 2000 clergy were ejected from the church because they were married. An Act of Parliament repealed all the legislation of the reign of Edward VI concerning the Prayer Book. The Convocation of Canterbury declared the doctrine of transubstantiation to be true.

Between 1555 and 1558 nearly three hundred people were burnt as Protestant heretics. Ridley and Latimer were burnt together at Oxford on 16 October 1555. Two Spanish friars were sent to Oxford to argue with Cranmer. They wore him down and he signed a document submitting to the Catholic church and denouncing the heresies of Luther and Zwingli. Still, he was appointed for burning. Having been forced to listen to a sermon, he prayed in deep penitence. And then to the astonishment of the congregation and authorities he revoked all his recantations! He said he had not believed them and at the stake he held his right hand into the flame first – the hand that had signed the recantations.

Thomas Cranmer had been Archbishop of Canterbury for over twenty years. He was a scholar and a man of conscience. He was often weak and sometimes vacillating. But Cranmer and the other reformers baptised the English Reformation in blood and paved the way for it to be consolidated by Elizabeth I.